Sunday was an exciting and busy day for WormholeRiders. We started early, hitting the Walk of Fame at 10:00 to drop off our questions and schedule an interview with Gary Jones.

We met Gary that afternoon on his lunch break and he was wonderful! Thank you Gary for taking the time to talk with us! We learned a lot about Gary and Walter. Stay tuned for the complete interview, available here at WormholeRiders! 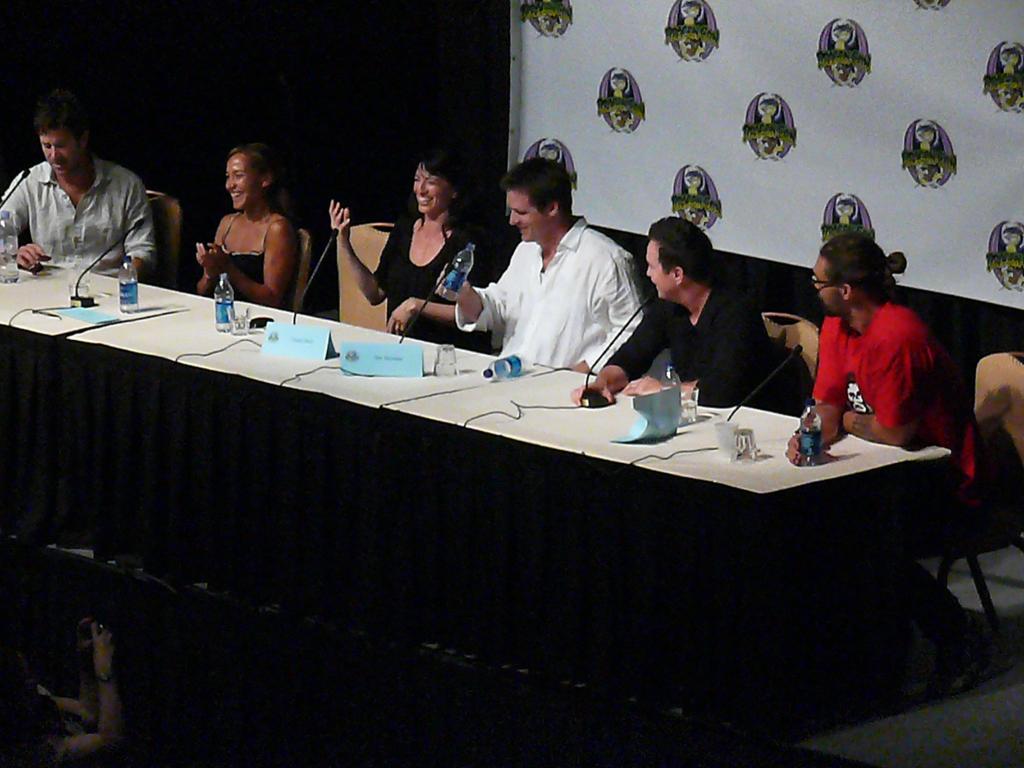 PlayItGrand and I dashed, giddy and excited from our interview with Gary to the Stargate Supergate panel. The panel consisted of Joe Flanigan, Rachel Luttrell, Claudia Black, Ben Browder, Paul McGillion, and Jason Momoa. The panel was HYSTERICAL! Unfortunately we had to leave half way through but not before we learned what stars made our favorite actors weak in the knees!

With nervous anticipation we headed to the interview room to set up for what perhaps was the biggest interview of our lives.

Before I go any futher I want to send out a special “thanks” to Ms. Julie Caitlin Brown and Mr. Craig Damon for all of their help. We want to thank you for giving us a chance. We really appreciate it! You both are the best!

I just have to say that talking with Claudia is nothing like you would think it would be. I was awaiting an awkward conversation filled with gaps but it wasnt like that at all. Interviewing Claudia was like talking to a friend. She was very easy to converse with and we had so much fun talking with her! We’ll give you the full report when we post the interview (available soon at WormholeRiders.com and ClaudiaBlackOnline.com).  Believe me, hearing me describe it isn’t anywhere near as good as hearing it from Claudia!

That’s not all! As many of you who follow us on Twitter know we had a special suprise guest at our interview with Claudia! Who is it? Well, since finding out would mean that you would have to sift through dozens of our Tweets to find the answer I’ll just give it to you! (Also because it’s so exciting I can’t help but tell you!)

Our special guest was the one, the only MR. BEN BROWDER!!!! Thats right, you heard it, Ben Browder stopped in on our interview and we were more than happy to have him!

After our interview we found ourselves at the Gate Support panel with Colin Cunningham and Gary Jones. Those two are hysterical together! Colin and Gary gave us a great musical rendition on why Major Davis was never promoted. Never fear, we’ll give you the full report.

Well WormholeRiders that’s it for today. It’s very late here and we have one more panel to cover tomorrow!Stay tuned for the final day of Dragon Con 2009!

Mon Sep 7 , 2009
Hey, while some are traveling home (and editing news stories too!), here’s a nice news piece about Dragon Con 2009 from CNN (way to go CNN!). More coverage from WormholeRiders about Dragon Con coming soon! 😛 We compliment CNN on their fine report. We looked for higher quality embed video […]