I’m not going to actually tell you how many years it has been since I’ve been to a Creation Convention because it’ll make me sound older than I actually am. So let me just say that this has been the first in a LONG time.

My friend White Rabite and I arrived early Saturday morning, intent on beating the crowds and finding a parking spot. To our surprise the con was in the same hotel as the Farscape con I was at in 2002 and the Tardis con White Rabite was at a few years earlier. At least we were on familiar territory…relatively. A quick breakfast and a call to PlayItGrand and we were on our way!

Even though we had general admission we managed to score some decent seats. We set up camp, took out our respective knitting and crocheting and settled in for some awesome music videos and the trivia challenge while we waited for Michael Shanks.

Our very own PlayItGrand was on the panel of experts during the trivia challenge. She didn’t win but man those questions were hard! These fans seriously knew their stuff!

His Name is Jackson…Daniel Jackson 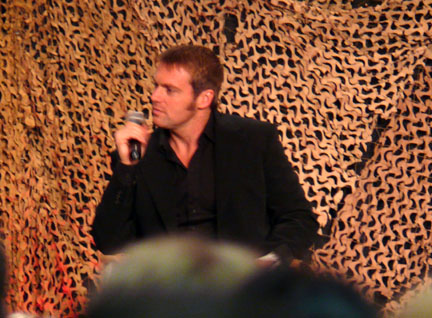 Michael was introduced by a Daniel inspired music video to “Another Way to Die.” Irony? We think so.

Oh Michael Shanks, how wonderfully funny you are! He had us laughing hysterically at points and awwwwing at others. Michael came on stage in a handsomely tailored black suit and…no socks. Apparently, Michael forgot to pack them and didn’t realize that the hotel gift shop might sell them or that there was a Target a block away. But it didn’t matter! Bare ankles or not we love him anyway!

We’ll have more Michael (and his bare feet) for you in our upcoming review of his Q&A session so stay tuned! 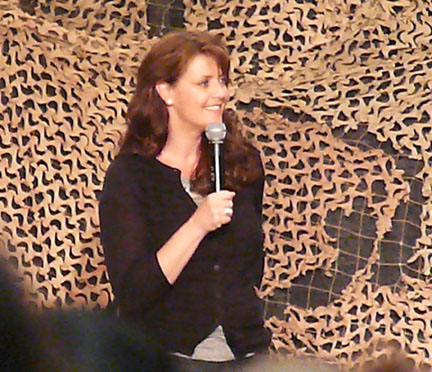 An adorable music video to “I Can Hear the Bells” from the musical Hairspray introduced Amanda. It captured her sweetness and the heart of Samantha Carter perfectly.

There are only a few words that can adequately describe Amanda Tapping, absolutely adorably amazing! Amanda was so sweet and so funny! She makes every person in the audience feel like she’s talking just to them. While we learned that Michael may have forgotten to pack his socks, we learned that Amanda apparently has a tendency to work with men who like to take off their pants! Not that Amanda is complaining…

Don’t worry, we’ll have plenty more of Amanda for you in our review of her Q&A session!

They Came, They Conquered, They Wore Costumes! 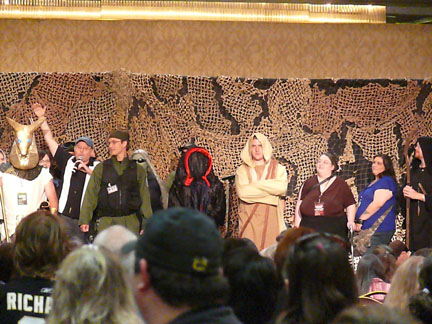 Given that this was a smaller convention, I hadn’t expected the costume contest to be very large. Boy was I wrong! There were at least 30 contestants. Let me just say, Stargate fans are so creative! The costumes were fantastic. There were even several small children in costume including a mini Woolsey and tiny Nox! All of the kids were winners!

The winner of the adult part of the costume contest was an Abydos Daniel. Second runner up was an excellent first prime of Anubis with light up eyes!

She Said My Name was Cool

The final part of my evening was to get Amanda’s autograph. The wait was long, yes, but so worth it. Amanda is so genuinely friendly in person. She honestly cares for each and every one of the fans and it shows.

I wasn’t nervous until I was face to face with her. They handed her my picture with the little sticky that had my name on it. She thought my name was cool! I squealed in my head but managed to squeak out a “thank you” before asking her if I could give her my card for WormholeRiders. She was excited to hear about the site and said she’d “absolutely” check it out. (More squealing in my head at this point). She even said that our name (WormholeRiders) was awesome!

I would have to say that my experience at the Chicago Stargate convention was great! I got to see two of my favorite actors and meet tons of really cool fans! Thank you everyone who was following us on the blog and on Twitter! The Chicago Stargate convention might be over on Sunday but we’ve still got plenty of coverage for you so check back often!

Remember, keep your arms and legs inside the wormhole at all times!

One thought on “He Forgot Socks…”

Mon Aug 24 , 2009
What a whirlwind today was! We started out at 8:15 with the Sunday Breakfast and Silent Auction. The same format applies to this as for the Dessert Party – everyone eats and then guest stars go from table to table. Our guests this morning were Paul McGillion and Rachel Lutrell. […]