Valerie Halverson was the assistant costume designer for season 9 of Stargate SG-1, and costume designer for season 10 of SG-1, and season’s 4 and 5 of Stargate Atlantis. Valerie was a new comer to the convention setting, but she did very well! She took questions, and also gave us a photo show-and-tell break down of the costumes that were being sent over from Bridge Studios for the Prop Museum. She also had some fascinating stories to share with us, giving fans better insight into how costumes are designed, and how the actors fit in!

Please Note: Even though I have used quotation marks, this is not necessarily word for word exactly what was said, only the most that I could manage to scribble down at the time, and make any sense of now. No audio or video recording is allowed.

When asked if there was any particular cast member whom she found to be difficult to costume, Valerie said that Jason Momoa was a bit if a handful! “He liked to go and buy things himself and he would bring them to me and go, “can we do something with that?” and it would be like a bear pelt. So I would say that he wasn’t a diva but he was definitely challenging.”

After three years, Jason came to Valerie and said that the previous costume designer said that if they bought anything to wear, they had to buy two. This is a smart thing to do because if something happens and an article of costuming is ruined, the episode’s continuity will be off because of the costume change that has to be made. So one time Jason bought 2 shark tooth necklaces to wear. “He was so proud of himself, he said ‘thank you so much’. Yes you can wear it on the show. So he walked on camera, he put them both on the same necklace, and we had to recreate that, and that was the end of us working so amicably together on that.”

Valerie also said that Rachel Luttrell’s real life pregnancy proved to be tricky. “[Rachel] took care of looking beautiful but I just really wanted her to still stay Athosian, and regal, and be that queen that she was while still having to have functional clothing.” Her pants had to be worn higher when she started showing.

When asked how the design for the loose, airy clothing of the Ancients – Morgan Le Fay’s dress in “Pegasus Project”, for instance – came about, Valerie said that much of that work had been done by her predecessors, “but I suspect that because the Ancients had ascended and they were sort of heavenly really, the idea to me was that it just lent itself. And because we use so much leather and structure, it really separated them from the rest of the cost 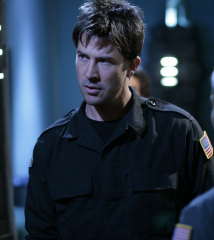 umes in a lot of ways. And they really were beautiful.”

When asked about Sheppard’s sudden habit of wearing the black BDU’s a lot more about the time that Valerie took over as head of the costuming department, Valerie admitted that there was a little bit of a story behind that change. “Joe [Flanigan] is a really really interesting guy that thinks about his character. When I came on board, maybe he saw that as an opportunity to have some changes because other people in the Atlantis crew were getting their uniforms changed, and he just really felt that he wanted to come across as more military, and he was basically the military leader. There was Weir and Carter and Woolsey, but he really wanted to be the most military guy there, and we felt that by putting him in the black BDU’s that that would sort of personify that. And he looks damn good in black, doesn’t he?” 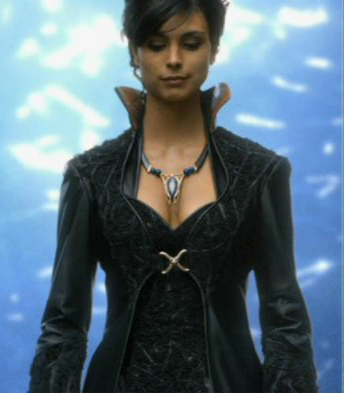 When asked about the most expensive outfit she has ever made, Valerie answered, “This is one of my favorite costumes. It was Adria, and I believe it was “Dominion”. She had on a black leather ‘vampire coat’ and then Ba’al put her in jail. She had this sexy little ‘40’s halter on and some leather pants. The reason was that I wanted to challenge myself because she’s such an incredible canvas to work with. Adria was such a great character that I actually started with leather and then I built a texture of leather on there with ribbons and used fabrics, and we built the whole thing. It took us a couple of weeks to figure it out, and she of course did it justice.”

Here are a few more of the interesting questions Valerie took:

Do the actors have any say about their costumes?
Valerie said that she tries to let the actors be comfortable since they have to be in them for so many hours per day. Most of the actors are game for anything because the costumes are so neat in science fiction! No kidding, Valerie!

Were you responsible for the uniform change in Stargate Atlantis at the start of season 4?
Valerie answered that as a costume designer she wanted to put her own touch on the show when she took over. She talked the producers into the new “sexy” outfits and leather uniforms instead of the producers talking her into it, which is apparently how it usually works! She’s interested in styl

Which cast member is the hardest to fit? The answer was prompt: Jason Mamoa! He’s so tall!

Where do you find your materials? Jo-anne Fabrics? Valerie had never heard of Jo-annes, but is now determined to find one! She said it takes years to learn where to look, and sometimes you just find things by chance, even in unlikely places. “We try anything.”

Do you ever buy whole pieces? Sometimes, because of time constraints, they do, even though it would be ideal to be able to create each costume from scratch. Often they will buy something and then re-work it. For example, this costume at the right, worn by the invaders in Atlantis’s “Daedalus Variations” is partially a hockey uniform with a serious paint treatment!

Now for a few interesting facts that Valerie shared!

Rachel Luttrell’s Wraith Queen costume had to be able to handle the very physical moves that Teyla does in “Queen”. In order to allow for this, Valeria used a woman’s riding skirt as the bottom of the dress.

She also commented that one of Ronan’s outfits is called “The Cow” because it used to much leather.

Valerie is “working on a secret project” in wardrobe that prevented Saturday’s tour to Bridge Studios from being able to visit the costume department! We’ll have to keep an eye out for it in Stargate Universe!

Thank you so much, Valerie, for your wonderful stories, and sharing your insight with us. After seeing your amazing work, it’s wonderful to be able to meet the genius behind the design! I also want to thank you for graciously offering to sign autographs for free for anyone who wanted them. I took her up on it and her signature is now in my 10 Years of Stargate SG-1 book!

One thought on “Valerie Halverson’s Q&A”

The Panel in Detail

Fri Apr 24 , 2009
This was the first time I have ever seen Creation have an almost ComicCon style panel, and it was very interesting! The guests were: Fulvio Cecere As Stargate SG-1’s Colonel Davidson, cammander of the Oddesy,  Fluvio is very proud that he is the only person to have commanded one of earth’s […]