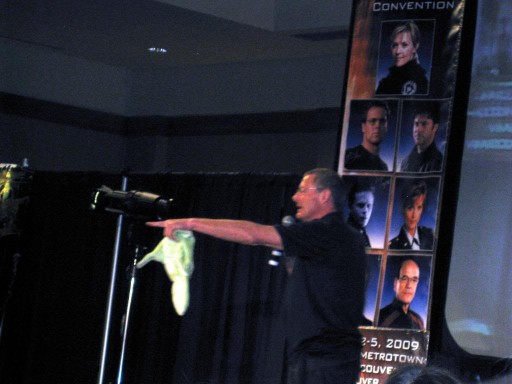 Dan Shea is hilarious, but I tell you, the man does not know how to stand still!  Back and forth across the stage, he’s worse than an 8 year old kid on a sugar rush! One person actually asked if he was being treated for ADD! He thought that was pretty funny.

Dan didn’t take many questions, mostly beceause it took him half an hour just to answer one. His answers where so long and rambling that I’m not sure that the transcript I will be writing later is going to make any sense!

We did learn a few interesing facts though. I didn’t know that he has been the stunt coordinator for Pysch, the USA comedy/crime show. He was also in a road tunnel stunt for the Fantastic 4 movie.

Fri Apr 3 , 2009
Connor was a little worried at first because as he said, “My standered StarTrek answeres won’t work here!” Connor has a TV movie coming up on Sci-Fi channel at the end of April. He said he’s watched some of those Sci-Fi originals, and as they go this one was pretty […]