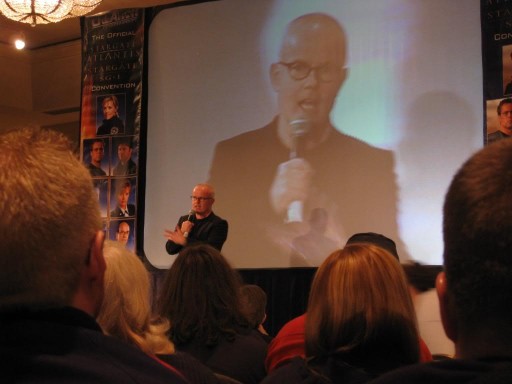 Gary let some big news slip this afternoon from TPTB, please don’t punish him too hard! We love him!). He said he was allowed to say he would be on Stargate Universe, possibly the episode currently titled “Air”, but beyond that he was not supposed to say a word. He admitted this after he said that he worked with Richard Dean Anderson to film the episode, and Jack has apparently been promoted once again to become a 3 star general! Go Jack!!!

Gary also said he will be in a TV movie called “Held Hostage”, but he did not mention what channel that will be or when it will air.

Gary entertained us with stories and impersonations. He was specifically asked to rehash the story of how director Peter DeLuise insisted that Gary do his lines as Captain Kirk for his first scene in the control room with Beau Bridges. No one minded, most of us hadn’t heard it before!

I took enough notes to write a full transcript for Gary’s appearance, but under the busy circumstances I will be unable to transpose them until the weeks after the convention. Believe me, it will be well worth the wait!

Fri Apr 3 , 2009
Andee Frizzell played every one of the Wraith queens in Stargate Atlantis except for the last one, in “The Queen”. She has a very interesting take on her multiple characters, and thinks any one of them would have been perfect for advertising for a line of beauty products! Here are […]